Markets got off to a strong start in October, with the S&P 500 Index (+5.6%) recording its biggest two-day rise since April 2020, before giving back some of those gains later in the week. The U.S. jobs report released on Friday, suggests that the U.S. economy may not be slowing enough to satisfy Federal Reserve policymakers. Downside economic releases earlier in the week, originally raised hopes that the Fed might slow its rate hiking cycle.

Friday’s job report provided a less encouraging signal regarding the inflation outlook, with the U.S. reporting that their economy had added 263,000 jobs in September, a decline from 315,000 in August, but still strong by pre-pandemic standards. At the same time, U.S. unemployment fell to 3.5%, equalling a five-decade low. This was driven by a surprise drop in the participation rate to 62.3%, suggesting that competition for available workers remains robust. Wage growth did however ease, with average hourly earnings continuing to decline on a year-over-year basis to 5.0%, compared to March’s peak of 5.6%.

OPEC+’s decision to cut oil production by 2 million barrels a day, its biggest production cut since 2020, saw brent crude back up at $98.33 per barrel (+15.29% for the week), deepening inflation fears.

U.S. mortgage rates continue to rise and are now at their highest level since 2007. The average for a 30-year, fixed loan increased 6.70% this week, up from 6.29% last week. The effects of this are beginning to be felt in the U.S. housing market, with mortgage applications dropping by 14.2% in the week ended 30 September 2022. U.S. home prices posted their biggest monthly decline since 2009. Median home prices fell 0.98% in August from a month earlier, following a 1.05% drop in July, Black Knight Inc. said in a report. The two periods mark the largest monthly decline since January 2009.

The UK’s credit outlook was lowered to negative from stable by Fitch Ratings, which cited risk of the government’s new growth plan increasing the nation’s fiscal deficit.

Prime Minister Liz Truss has dropped her government’s plan to cut taxes for the highest earners just 10 days after announcing it, in a bid to fend off a mounting rebellion from Members of Parliament in her own Conservative Party. U.K. Chancellor, Kwasi Kwarteng will also bring forward the announcement of his medium-term fiscal plan. He was previously due to publish the proposal on Nov. 23, but the FT said it will now be unveiled later this month.

Like the U.S., the key rate on mortgage borrowing costs in the UK climbed to its highest level in almost 14 years. The average two-year fixed-rate mortgage on a home rose to 6.07% on Wednesday, the highest since November 2008, according to Moneyfacts Group Plc. The average five-year fixed rate also closed in on 6%, a level not seen since February 2010. 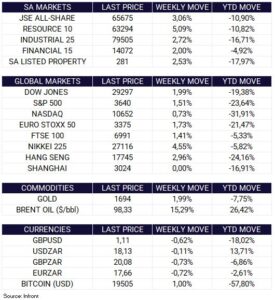 In South Africa, manufacturing PMI declined to 48.2 in September, compared to a reading of 52.1 in August.

South Africa’s government will seek cabinet approval for an $8.5 billion plan to secure funding from the UK, U.S., Germany, France and the European Union to transition away from the use of coal to generate electricity. A second draft of the investment plan (first announced at COP26) has been completed and is being shared with “key stakeholders” ahead of its submission to cabinet, said Vincent Magwenya, a spokesman for South African President Cyril Ramaphosa.

The JSE All-Share Index ended the week up +3.06%, with all three of the major sectors stronger. The resource sector (+5.09%) was particularly strong, followed by the industrial (+2.72%) and financial (+2.00%) sectors. By Friday close, the rand had lost its mid-week strength, trading at similar levels to the previous week’s close (R18.13 to the U.S. Dollar). 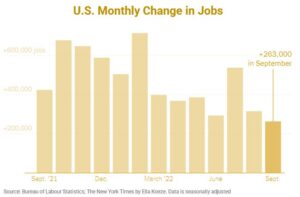 The U.S. economy added 263,000 jobs in September, a decline from 315,000 in August. The number was the lowest since April 2021 but still solid by pre-pandemic standards. The gain was shy of recent monthly totals but still robust, indicating that the economy was maintaining momentum despite higher interest rates. Source: The New York Times, by Sydney Ember