U.S. stocks closed lower for the week as investors continued to digest hawkish messages from the Fed and a mixed U.S. payrolls report, released Friday. The report showed that monthly job gains in the U.S. (+315 000) were lower than July’s figure of +526 000, but still strong. The headline data was close to expectations of a gain of 300 000, while the unemployment rate rose to 3.7% from 3.5%, disappointing forecasts. Odds of a three-quarter-percent hike at the September Federal Reserve Open Market Committee meeting receded slightly in the wake of the report, to about 65%.

U.S. consumer confidence rose by more than expected in August to the highest level since May, as Americans grow more optimistic about falling gas prices. “Looking ahead, August’s improvement in confidence may help support spending, but inflation and additional rate hikes still pose risks to economic growth in the short term,” said Lynn Franco, senior director of economic indicators at the Conference Board.

The Federal Reserve’s (the Fed) quantitative tightening program will ramp up in September as part of a broader plan to reduce a $9 trillion portfolio. The Fed is set to drain $95 billion from the economy each month, through rolling off mortgage-backed securities and treasuries from its balance sheet. The tightening program is expected to put upwards pressure on interest rates and reduce liquidity in the U.S. financial system.

Eurozone inflation hit a fresh high in August, rising 9.1% y/y from 8.9% y/y a month earlier. Inflation in the area is expected to reach double digits in the coming months if historically high natural gas prices don’t subside. The recent spike was driven by a rise in gas prices and a double digit jump (+10.6% y/y) in food, alcohol and tobacco prices. Money markets are now putting the probability of a 75 basis-point European Central Bank hike at more than 60%.

China’s economic outlook worsened over the week as coronavirus outbreaks in major cities triggered fresh lockdowns. Bloomberg’s quarterly survey of economists saw the country’s  2022 GDP estimate cut to 3.5% from 3.9% previously, falling short of the government’s 5.5% target. On the equities front, U.S. regulators are expected to begin inspecting the audit papers of US-listed Chinese companies this month. 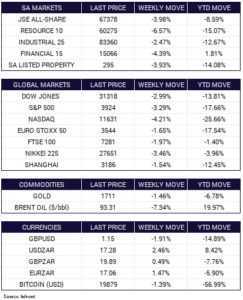 In South Africa (SA), Absa’s Purchasing Managers Index (PMI) rebounded in August after a dip in July. The index rose to 52.1 from 47.6 last month, beating estimates of 48.2. Absa also reported that the business activity index rose back above the neutral 50-point mark for the first time since March. An easing in the severity of load-shedding as well as the return of production at Toyota’s flood-affected factory supported domestic demand across the value chain.

Shell’s bid to search for oil and gas in South Africa was blocked this week after a court declared that the company didn’t follow fair procedure and failed to take relevant considerations into account. The company will therefore be barred from going ahead with its planned oceanic seismic survey along the country’s east coast. The Minister of Mineral Resources and Energy, Impact Africa and BG International were ordered to pay the costs of the court application.

On the electricity front, the SA government is pushing ahead with its plan to create a new state-owned power company. The proposed new company, called Generation 2, will be formed by converting three coal-fired plants, that were set for decommissioning, into gas-burning generators.

Walmart, the U.S. retail giant, has signed an agreement to begin buying the 47% stake in South African retailer Massmart it does not own. Massmart had said on Monday that its majority owner Walmart had offered it 6.4 billion rand to purchase the remaining shares and to delist the company from the Johannesburg Stock Exchange. The move will allow Walmart to invest more capital in the struggling Massmart business and enhance operations.

The JSE (-3.98%) followed global peers lower this week after a strong selloff across all sectors. Resources (-6.57%) faired worst following declining commodity prices and disappointing results from the likes of Impala Platinum. The rand weakened over the week to end at R17.28/$. 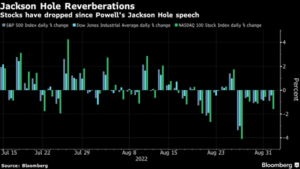 The U.S. market has taken to heart the “stern talking to” it got from Jerome Powell last week Friday, with major indices selling off – exacerbated by a rise in bond yields. Source: Bloomberg