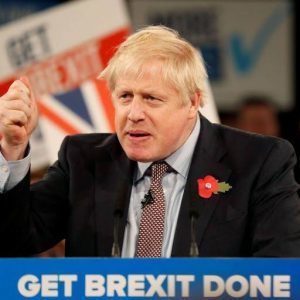 Global stocks rallied over the week as some uncertainty was lifted around three issues that dominated the market narrative for most of 2019: trade, Brexit and Fed policy.

Prime Minister Boris Johnson has won a decisive majority in the UK general election held this week. Labour leader Jeremy Corbyn announced that he would be stepping down, while Liberal Democrat leader Jo Swinson, who lost her seat, also resigned. Conservative leader Boris Johnson is promising to take the UK out of the EU next month "no ifs, no buts" and expects to pass his withdrawal deal through Parliament in time to leave the EU formally on January 31st. The UK and EU have until the end of 2020 to negotiate a trade agreement, unless an extension of no more than two years is requested by July, something Johnson has previously ruled out. Trade deals with other countries have typically taken several years. Business and financial markets have welcomed the clear Conservative majority, not least because it kills the spectre of a Corbyn-led government.

US President Donald Trump and Chinese Vice Minister of Commerce Wang Shouwen each confirmed that the US and China have reached preliminary agreement on a phase one trade deal. The trade deal is still short on details, but it will go a long way in diffusing tensions between the world’s two largest economies. The deal will include the cancellation of tariffs scheduled to take effect Sunday, additionally, 15% tariffs will be reduced to 7.5% while 25% tariffs on specified imports will remain in place. China agreed to unspecified agricultural purchases, to intellectual property protections, and to opening up its market to US financial services firms, among other measures.

The Federal Reserve left rates unchanged as it concluded its December meeting on Wednesday. The Federal Reserve indicated it will likely not raise rates in 2020, removing the fear among investors that it would repeat a mistake it made last year by tightening monetary policy prematurely and knocking the stock market.

European Central Bank President Christine Lagarde chaired her first meeting this week, and as expected no policy changes were made. Lagarde said that the euro zone’s economic slowdown is showing signs of bottoming out, suggesting further interest-rate cuts are unlikely any time soon.

The JSE capped its best day in more than six months on Friday after US President Donald Trump said the US and China have reached agreement in finalising a phase one trade deal. Banks made a strong recovery on Friday after a difficult week, with Standard adding 4.36% to R169.50, FirstRand 3.39% to R64.10, and Nedbank 2% to R216.90.

South Africa’s government on Friday asked industry for the cheapest and quickest options to ease a power crunch, as cabinet held an emergency meeting to try to resolve the power crisis. Eskom, which cut power for a ninth straight day on Friday, is choking under a massive R450 billion ($30.6 billion) debt burden and struggling to meet demand because its creaking coal-fired power stations haven’t been maintained properly. 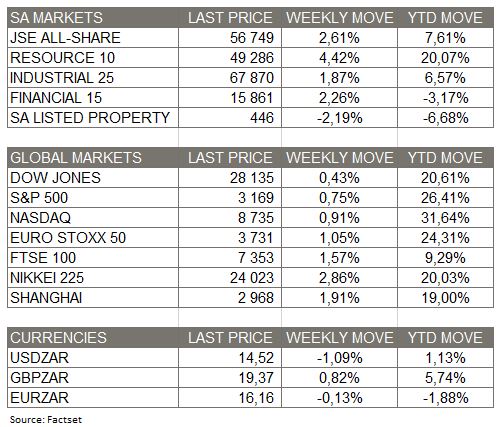 Boris Johnson's Conservative Party have stormed to a landslide victory in the 2019 general election. Their haul of 364 seats (with one constituency left to declare), coupled with a catastrophic loss of 59 seats for Labour gives the prime minister the largest Tory majority since 1987. The one blemish on the Conservatives' night though was in Scotland where a resurgent SNP took 48 of 59 seats, representing an increase of 13 and leading inevitably to renewed and strengthened calls for a second referendum on Scottish independence. 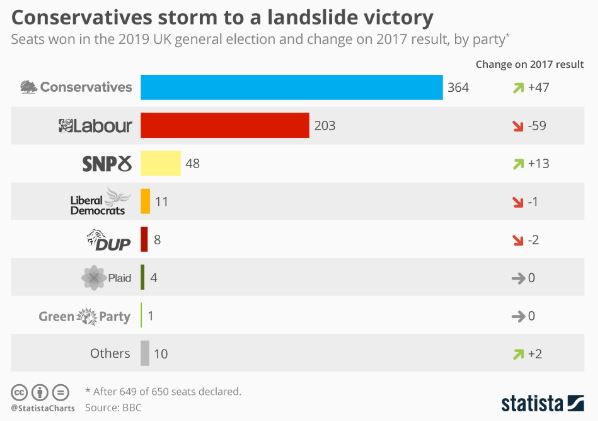