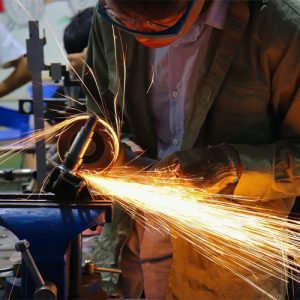 Equity markets continued to rise this week despite the World Health Organization recording its largest single-day increase of global coronavirus cases since the start of the pandemic on Saturday. Member states reported more than 212,000 newly confirmed cases of COVID-19 to the global body with most cases coming from the Americas, including the United States and Brazil.

Investors are seemingly more focussed on the upbeat economic data released over the week with U.S. stocks finishing the week firmly higher in a holiday-shortened week (4th of July U.S. Independence Day). The Nasdaq Composite forged ahead to a new record intraday high this week, spurred by gains in the technology sector. The index is up over 13% year to date.

During congressional testimony this week, U.S. Federal Reserve Chair Jerome Powell, pointed to an increase in hiring and a strong rebound in consumer spending as positive signs for a U.S. economic recovery, at the same time he cautioned that the path to a full recovery remains “extraordinarily  uncertain”.

Improving signs in the jobs market also spurred investor sentiment with Thursday’s official payrolls report from the U.S. Labor Department showing a record 4.8 million gain in nonfarm payrolls in June. The unemployment rate also fell more than expected, from 13.3% to 11.1%.

European stocks rose over the week as the virus induced economic slump continued to ease in June as lockdown restrictions were lifted and shops and businesses reopened. European Central Bank (ECB) President Christine Lagarde said in a webinar that the worst of the coronavirus crisis might be over, adding that her view was expressed with some trepidation because there could be a second wave of infections.

The UK and EU continue to make little progress in trade talks with only six months to go until the transition period ends. UK Prime Minister Boris Johnson said the government would fast-track 5 billion of spending on infrastructure works to help an economic recovery. The UK economy is already two months into a recovery and rebounding faster than expected according to Bank of England Chief Economist Andy Haldane.

China's Caixin Services PMI hit its highest level in a decade in June as the latest sign that world’s second largest economy continues to experience an uptick in economic activity. The services PMI came in at 58.4, up from 55 in May.

Global equity markets finished the week mostly higher with the Dow Jones (+3.25%), S&P 500 (+4%) and Nasdaq (+4.6%) all ending firmly in the green. The Euro Stoxx 50 (+2.8%) was also stronger over the week while the FTSE ended flat. The Shanghai Composite Index (+5.8%) rallied strongly over the week as several Chinese data points suggested a firm economic recovery.

The rand strengthened this week as investor appetite for riskier assets rose, with the local currency breaking through R17/$ for the first time in two weeks. The rand was also boosted by some positive local economic data with the ABSA purchasing managers index (PMI) reaching its highest level since August 2013 and a first-quarter surplus in the current account of SA's balance of payments (for the first time in 17 years).

GDP figures released earlier in the week by Stats SA show SA's economy contracted 2% in the first quarter. This was better than economists' consensus forecast of about 4%, but it was the third negative quarter in a row for the first time since the global financial crisis of 2007/2008. While the agriculture and financial services sectors held up well, investment saw the worst contraction in about 10 years.

South African stocks, as measured by the FTSE/JSE All Share Index, ended the week up 1.6%. 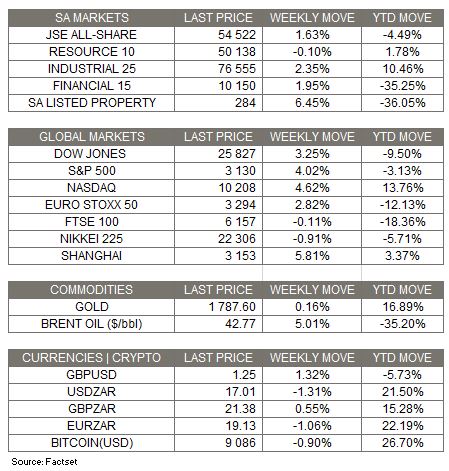 As we get closer to the U.S. presidential election, how stocks are doing could signal who might win in November. Since 1928, the stock market has accurately predicted the winner of the election 87% of the time and every single year since 1984. When the S&P 500 Index has been higher the three months before the election, the incumbent party usually won, while when stocks were lower, the incumbent party usually lost.