After more than 50 ministers and several Cabinet members stepped down, U.K Prime Minister Boris Johnson announced his intention to resign. This comes weeks after Johnson narrowly survived a no confidence vote by the membership of the Conservative Party. Members stepped down in protest of his handling of multiple scandals that have shaken his administration. Johnson will remain as caretaker prime minister until a new party leader is chosen by the Conservative Party. The pound rallied on the news, rising above the $1.20 level as some of the political uncertainty that was priced into the pound was removed.

In the U.S., non-farm payrolls increased 372 000 in June, well above consensus expectations of around 270 000, continuing what has been a strong year for job growth. The country’s unemployment rate was unchanged at 3.6%, although the labour force participation rate fell from 64.4% to 62.2%. The positive data keeps pressure on the Federal Reserve to continue with rate hikes as the U.S. labour market remains tight, giving room for the Fed to raise rates. After the release of the report, futures markets were pricing in a 98% probability of a 0.75% increase in the federal funds rate later this month.

Minutes released Wednesday from the U.S. Federal Reserve’s Federal Open Market Committee (FOMC) June meeting revealed that policymakers are increasingly concerned that inflation expectations will become entrenched and that an even more restrictive stance could be appropriate if elevated inflation pressures were to persist. Officials determined that a rate hike between 0.5% and 0.75% would likely be appropriate at the July FOMC meeting.

International Monetary Fund Managing Director Kristalina Georgieva this week warned that the risk of a global recession has risen on the back of a worsening global economic outlook. Georgieva said that the global spread of inflation, substantial interest rate hikes by central banks, wide-ranging sanctions against Russia and a slowdown in China’s economic growth are some of the factors impacting global markets.

Former Japanese Prime Minister Shinzo Abe was assassinated in Nara, Japan on Friday while speaking at a political campaign event days before upper house elections. Security officials at the scene apprehended a 41-year-old suspect. The suspect, name Tetsuya Yamagami, admitted shooting Abe with a homemade gun, and said he had a grudge against a “specific organisation”, police said.

Germany’s foreign trade balance fell into negative territory for the first time since 1991, showing a deficit of EUR 1 billion in May. Exports fell surprisingly, partly due to supply constraints, while imports spiked on higher prices for energy, materials and food. Robin Brooks, chief economist of the IIF, put it this way: “Germany’s growth model has been to import cheap energy from Russia, use that to assemble manufactured goods and export those goods to the rest of the world.” However,  cheap energy is no longer cheap.

U.S. stocks erased much of the previous week’s losses on optimism that the Federal Reserve will be able to curb inflation without tipping the economy into a recession. All three major U.S averages finished up for the week with the Nasdaq (+4.56%) higher for a fifth consecutive day for the first time this year. Mega-cap tech stocks realized gains ranging between 4% – 10% as risk appetite grew. The S&P 500 Index rose +1.94% while the Dow Jones edged +0.77% higher. The second-quarter earnings season begins next week, with reports due out from most major banks. Shares in Europe (Euro Stoxx 50) rose +1.69% while the FTSE 100 managed a +0.38% gain. Chinese stocks dipped with the Shanghai Composite down -0.93%. The Nikkei 225 ended the week up +2.24%. Brent oil fell by  -3.93% while Gold declined by -3.77%. 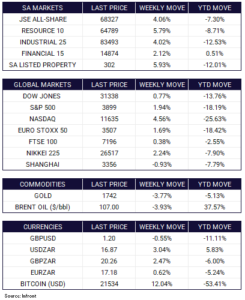 South Africa’s state power utility, Eskom, remained in the spotlight this week. After a week of illegal strikes that deepened electricity outages, The National Union of Metalworkers of South Africa (Numsa) and the National Union of Mineworkers (NUM) finally agreed to Eskom’s wage offer. The new deal will be “a struggle for Eskom to afford,” the utility said, costing more than 1 billion rand ($60 million) over the year-long term. The agreement included a 400 rand increase in monthly housing allowances.

The National Treasury published final amendments to regulation 28 of the Pension Funds Act this week. The amendments make some adjustments to these regulations, specifically, introducing a definition of infrastructure, and setting a limit of 45% for exposure to infrastructure investment. The regulations also confirm the new 45% limit for exposure to foreign assets. Hedge funds are still limited to 10% (max 2.5% per hedge fund and 5.0% for a fund of funds hedge funds) while retirement funds will continue to be prohibited from investing in crypto assets.

South Africa’s private sector activity (as measured by the S&P Global South Africa Purchasing Managers’ Index (PMI)) expanded at a faster pace in June, aided by demand and employment growth. The PMI rose to 52.5 in June from 50.7 in May, recording its highest level in just over a year (>50 indicates growth in the sector). “Output and new orders increased at quicker rates, driving employment growth to the strongest in a year,” S&P Global economist David Owen said. 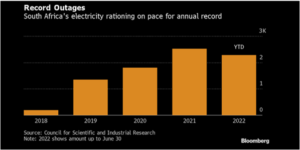 South Africa’s crippling power cuts are approaching an annual record, and there are still six months to go. Eskom’s diesel expenditure for the year so far is more than double the amount the utility budgeted for. The company has spent about R4.14bn on diesel since January against a budget for the period of R2bn. Source: Bloomberg