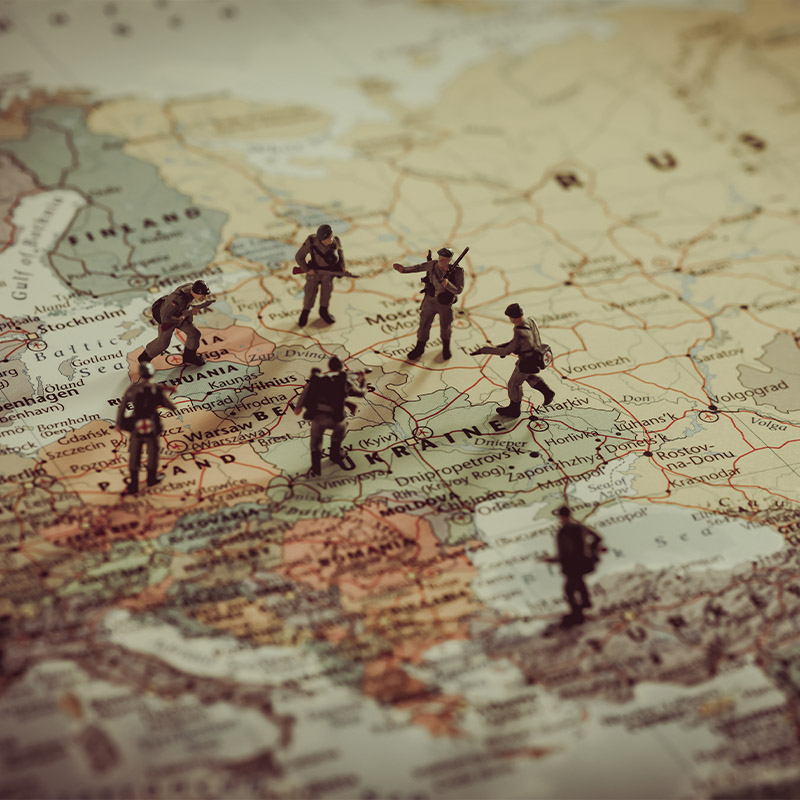 The risk of conflict on the Ukrainian border continues to dominate headlines and drive investor sentiment. On Tuesday, Moscow claimed it had begun withdrawing some of its military units, however, a day later NATO accused Russia of increasing the number of troops it has amassed at the Ukrainian border. U.S. President Joe Biden recently stated that he believes, after receiving information from U.S. intelligence, that Vladimir Putin has decided to attack Ukraine and that an invasion on Kyiv could come within days. Putin, who continues to flex Russian military strength, has also ordered drills of Russia’s strategic nuclear forces along Ukraine’s northern border this weekend. All eyes will be on next week’s meeting between the U.S. Secretary of state Antony Blinken and Russian Foreign Minister Sergey Lavrov as a solution to the standoff may transpire.

The minutes of the Federal Reserve’s January meeting were released this week, providing little new information. The minutes echoed previous statements from the Fed, indicating that interest rate hikes are likely on their way soon. St. Louis Federal Reserve President James Bullard reiterated that the Fed’s “credibility was on the line” and that they needed to act fast. Analysts are now pricing at least six rate hikes this year but are becoming increasingly concerned that the central bank may not be able to slow inflation without inflicting damage to the economy. In other inflation-related news, U.S. producer prices jumped 9.7% year on year and 1% month on month in January, exceeding forecasts.

China continues to be one of the only countries increasing liquidity rather than reeling it in, as the Peoples Bank of China boosted support for its slowing economy by injecting in cash through policy loans for a second straight month. China’s central bank pumped in 100 billion yuan ($15.7 billion) into the banking system while leaving the borrowing rate unchanged. In other economic news, China’s inflation eased in January as energy and food prices softened, which provided Beijing with more leeway to help the slowing economy.

Inflation in the United Kingdom reached a 30-year high in January coming in at an annual 5.5%, ahead of forecasts. This print contributed to increased expectations for the Bank of England (BOE) to announce a third consecutive interest rate increase in March. The BOE now expects inflation to peak at 7.25% in April, having previously projected a 6% maximum in its December report.

Data from FactSet Research reveals about 84% of the constituents of the S&P 500 Index have reported for Q4 2021, while blended earnings per share (which combines reported data with estimates for those that have yet to report) shows that earnings growth is running at 31% and sales rose about 15.5% compared with the same quarter a year ago.

Positive economic data prints came out of South Africa (SA) this week amid an otherwise barren economic landscape. South African headline inflation fell in January to 5.7% from 5.9% in December, while core inflation rose from 3.4% to 3.5%, both in line with consensus. Headline inflation remains to linger near the peak of the 3-6% target range of the SA Reserve Bank. However, some analysts are marking December’s figure as the peak in inflation and projecting a gradual decline in the coming months.

Retail trade sales rose 3.1% y.o.y in December, up from November’s 2.7% growth. For the 2021 year, retail trade sales grew 6.4%, making up most of the ground lost in 2020 when the sector shrunk by almost 7%. “All seven types of retailers showed positive year-on-year growth rates over this period [2021],” Stats SA said. Textiles, clothing and footwear led the group with strong growth of 19.2%.

In other news, Eskom’s financial position has come under the spotlight, as South Africa’s government considers taking over part or all of its R392 billion debt in an effort to restructure the utility’s loan obligations. The International Monetary Fund stated that Eskom’s debt is at “unsustainable” levels and expressed concern towards the State-owned enterprise’s financial position. Another challenge the government faces is its sustainability to support the unemployed and poor, as South Africa’s extension of the monthly grant for the jobless means that there are still twice as many welfare beneficiaries as registered taxpayers in the nation.

The JSE continues to fare better than its international counterparts, closing the week down a mere -0.02%. Resources caught a strong bid as good guidance and a favourable economic backdrop played in favour of the industry’s companies. The Rand strengthened this week to end at USD/ZAR 15.12.

Amidst the uncertain situation between Russia and Ukraine, there cannot be any exact parallel for what is about to transpire in the markets, but the above table put together by Keith Lerner at

Truist is useful. There is a need for caution, however, stocks tend to favour the green, with 75% of events resulting in a positive index 12 months later. Source: Bloomberg

2023 has started the year with equity markets rising, bond yields falling, and the U.S. dollar weakening, very different to the trends that prevailed in 2022. This week’s all important

Friday’s employment report in the United States turned sentiment back in a positive direction as investors weighed a renewed possibility of the Federal Reserve (Fed) achieving a soft landing. The