With the first half of 2022 behind us, the market’s focus has shifted from inflation to economic growth concerns. Much of the week’s economic data missed consensus expectations, and some signals suggest that economic activity is slowing. Looking across equities, bonds, commodities, and currencies, all four of these markets may be starting to sniff out slower growth ahead. Most notably the bond market, with the 10-year U.S. Treasury Note as low as 2.79% on Friday, after trading as high as 3.50% in June, when inflation remained the central theme.

Data released on Wednesday showed that the U.S. economy decreased at an annualised pace of 1.6% in the first quarter, reflecting a deeper contraction than previously reported. At the same time, personal consumption expenditures (PCE), fell by -0.4% in May, the first decline in 2022. The silver lining for investors in the PCE data was a downside surprise in inflation signals. The Fed’s preferred inflation gauge, the core (less food and energy) PCE price index came in at 4.7% for the 12 months ended in May, below expectations and the lowest level since November.

In the U.K. business confidence fell to a 15-month low, with firms also reporting a moderation in hiring intentions. At the same time, The UK’s current account swung into a record deficit of GBP 51.7 billion (8.3% of GDP) in the first quarter, driven by the higher costs of fuel imports.

Eurozone inflation accelerated to another record high of 8.6% in June, driven by higher energy and food costs. Nevertheless, ECB President Christine Lagarde reiterated guidance for a 0.25% rate hike in July, followed by another hike in September, the size of which depends on incoming data. This despite more hawkish ECB policymakers continuing to bring up the possibility of a 50-basis-point interest rate hike in July.

In China, manufacturing and services data improved in June, both moving into expansionary territory (above a reading of 50). Manufacturing PMI reached 50.2 in June, up from 49.6 in May, while the non-manufacturing PMI rebounded to 54.7 in June from 47.8 in May. The latest PMI readings suggest that supply chain distortions may be declining in China

The country announced that its two largest cities have contained Covid-19 after a four-month lockdown that saw millions of residents confined to their homes including exhaustive testing and restrictions on daily life. Beijing also announced that it has reduced quarantine times for inbound travellers by half to 7 days.

Finland and Sweden are on a potentially clear path to NATO membership now that Turkey has agreed to relent on its objections. Turkey said it will support inviting the two Nordic countries into the military alliance, The accession of the two countries will radically expand the northern frontier between the alliance and Russia. On the financial front, Russia defaulted on its external sovereign bonds for the first time in a century, the culmination of ever-tougher sanctions that shut down payment routes to overseas creditors. 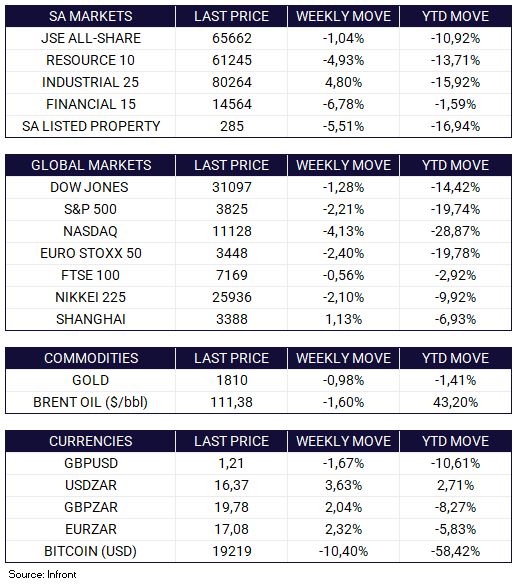 South African consumer confidence tumbled to its lowest level in more than three decades according to the FNB/BER Consumer Confidence Index. The index recorded a -25.0 reading in the second quarter of 2022, compared to -13.0 in the prior quarter.

At the same time, data from BankServAfrica showed that SA’s average salary declined sharply in May. The country’s average take-home pay in May declined by -6.7% to R14,696 compared to the same period a year ago, marking one of the largest annual falls on record. Consumer spending which contributes approximately 63% to South Africa’s GDP, is likely to feel the strain in coming months, according to BankServAfrica.

Eskom has agreed to unions’ demands on the reinstatement of some conditions of employment in addition to the 7% salary increase. Unions have also demanded a one-off lump sum payment to employees and that the 7% offered should be on an across-the-board basis. Eskom wanted it to be implemented in a staggered manner where the low earners received the full 7% while those earning higher salaries would take less. Negotiations remain ongoing.

Despite South Africa reporting an increase to its trade surplus in May (R28.3bn compared to R15.5bn in April), the rand came under pressure this week as global economic growth concerns together with rolling blackouts weighed against the country’s growth prospects. By Friday close, the rand was trading at R16.37 to the U.S. Dollar, depreciating by -3.63% for the week.

The JSE All-Share Index ended the week down -1.04%, dragged lower by the resource (-4.93%) and financial (-6.78%) sectors. Meanwhile, the industrial sector (+4.80%) posted a strong weekly gain on the back of moves higher from Naspers (+31.6%) and Prosus (+24.7%), driven by the announcement of an open-ended share repurchase programme of Prosus and Naspers shares. The repurchase program will be funded by a sell-down of Tencent shares, with the objective of narrowing the respective company’s discounts to their net asset values (NAV). 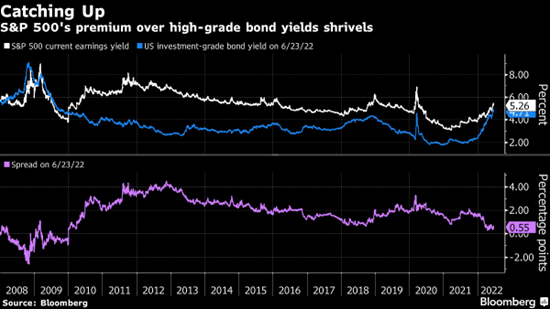 Inflation concerns have pivoted to economic growth concerns in recent weeks. That’s not unreasonable, as the latest update shows U.S. gross domestic product (GDP) declined at an annualised rate of 1.6% in the first quarter. With the huge exceptions of the Covid-scarred first two quarters of 2020, this was the weakest U.S. growth since the spring of 2009. Source: Bloomberg